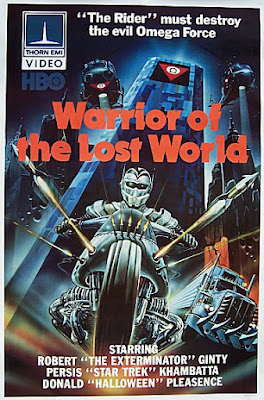 Director: David Worth
Tagline: In another time... in a world ruled by tyranny and violence... only one man can stop the nightmare.

In a galaxy far, far away, this film starts out with a scrolling back-story. That story contains all the elements of a great low-budget 80’s sci-fi flick. After a nuclear disaster that leads to apocalyptic chaos, earth has been reduced into a big-ass car junkyard.

All kidding aside, this was quite a fun rip-off of Mad Max. Rip-off might be a little rough, but the filmmakers certainly pick up their steam off the success of the classic series. Just imagine Mad Max being made on an even lower budget with a lead actor who only has two modes of communicating, mumbling in a gruff, ‘I don’t give a fuck’ monotone and screaming banshee hysteria. The Rider played by Robert Ginty, bless his heart, does his best to channel Snake Pliscan but comes up a little short. The villain on the other had, played by the great Donald Pleasance, hits the mark as Prossor, an “evil despot”, whose costume oddly resembles Austin Powers’ Dr. Evil.

But this film isn’t about great acting or even the best special effects. What this film has going for it that really won me over is spirit. It’s so cheesy and odd on so many levels but is so earnest in being a tough apocalyptic action flick. The film really brings it when it comes to borrowing source material. There’s a Mad Max element, a Big Brother 1984 element and with the Rider’s talking motorcycle Einstein, you get a weird Knight Rider element.  And if you’ve always thought Fascists had cool uniforms, Prosser’s Omega Army themselves have a cool visual appeal, borrowing black uniforms with a Nazi-like armband with the Omega symbol on a red triangle.

Aside from the Omegas you have a band of outsiders or “Enlightened Elders”, who have been hiding out in the mountains resisting Prosser and his tyranny of mind control. Basically though the resisters are a fucked up gang of painted face new-wavers, white Kung-Fu experts, some mean ass transvestites and a couple of guys that look like stand-ins for WWF wrestler Mankind. This gang is appears to be held together by some old dude who imagines himself a broke ass David Carradine.

When they aren’t striving for freedom they seem to be heavily engaged in a series of Royal Rumble brawls against each other. Well, they seem very bored and pent-up without the leadership of old geezer, Professor McWayne and his daughter, the exotic Nastasia. That was probably a hot name in the early 80’s but most of those bitches turned out to be cracked out hookers. Anyway this is were the true conflict of the film comes into play as the professor has been captured by Prossor’s army and stands to face execution by way of electrocution followed by blow torch fire burning. Strong stuff. 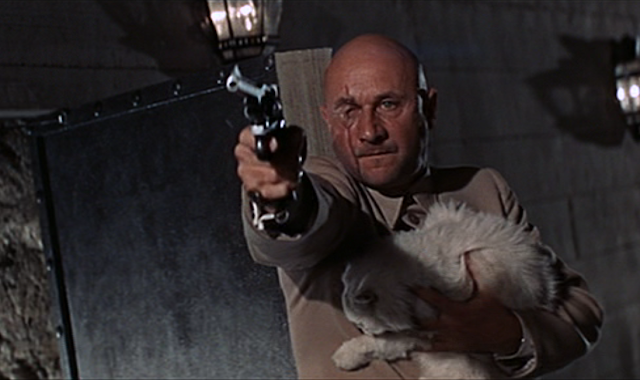 The Rider is a reluctant hero. As a loner badass, he would basically be happy ripping through no-mans land, periodically blowing up shit with missiles fired from one of his four exhaust pipes. But fate wouldn’t leave him alone. Before he knows it, he’s roped into saving the world after he crashes Einstein head-on into a mountain during a high-speed chase with the Omega patrol. As fortune would have it, the mountain is actually a secret portal into the lair of The New Way Gods, the upper echelon of the Outsider faction. They apparently hang out with Fred Williamson in this cave resembling an ice cooler, wearing togas. They fix The Rider up real good. Consequently though they expect him to go save Nastasia’s daddy-o from the Omega concentration camp. He is after all the Chosen One. Nastasia gives him some encouragement with a gun pointed at his wang.

And so we end up with a lot of action as The Rider and Natasha go on their search and rescue mission after McWayne. There’s this hilarious scene when they’re going through this cave and a bunch of zombies make an appearance out of nowhere and for seemingly no reason other to throw some zombies in there.

I was amazed at how many kills Rider racks up, he’s a one-man killing machine, tearing down the Omegas as they increasingly prove themselves to be the worst soldiers in human history.  The first mission ends with the rescue of the father while leaving behind of the daughter, which necessitates a second mission.

This film has a bunch of awesome vehicle designs that get showcased in a plethora of car chase sequences. I also have to mention the laughable sound design whereby every sound from machine gun fire to helicopter propelling all seem to be made form the same video game sound gadget.

What scores the highest note for me is the soundtrack itself. Very John Carpenter-esque. Just awesome, I love that sound, it really carried the film.

This film is great for a Friday night of mindless late night viewing. It’s wildly entertaining if you can appreciate low-budget, hammy post-apocalyptic sci-fi. 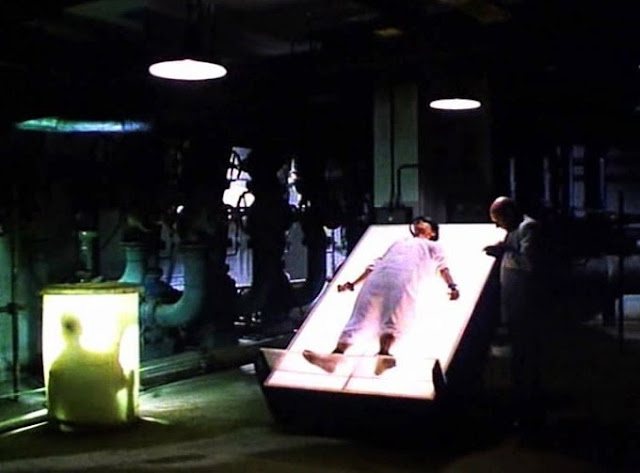