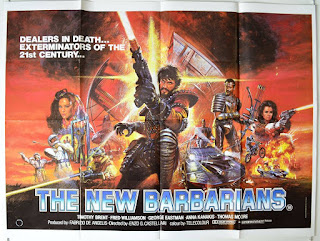 I’m predisposed with a strong fondness for post-apocalyptic themed sci-fi movies. So, I’m willing to cast aside judgment on the technicalities of acting quality or believable costuming. Forgiving, perhaps to a fault. In fact, the more corny the acting and the more ridiculous the outfits, the better. It’s what I’ve come to expect and appreciate from the slew of Road Warrior knock-offs that were produced throughout the 1980’s. Italy was a leading proponent of such flicks and I consider The New Barbarians among the better homages.

Thanks to Quentin Tarantino, director Enzo G. Castellari, is now famous for having directed the original Inglorious Bastards a few years before Barbarians. I first became aware of Castellari for directing a couple of other post-apocoliptic gems, 1990: The Bronx Warriors and the follow-up, Escape from the Bronx. As with a slew of other Italian directors of the era, he aspired to copy successful American films for the Italian market at a fraction of the cost. His complete filmography includes well over 20, mostly genre works.

Filmed in 1982, The New Barbarians comes off the heels of 1981’s The Road Warrior and clearly draws heavy inspiration from it. Mainly drawing on themes, more so than actual plot. That's not meant to be a dig, The Road Warrior was instantly iconic and remains influential. Barbarians creates it’s own post nuclear war conditions in which a gang of death worshipers calling themselves the Templars (see what he did there?), seek to wipeout the remaining pesky survivors completely.

The Templar gang prowls the terrain on dirt bikes and war-modified dune buggies rigged with drills, machine guns and spinning blades. I hope to have your attention by now. The plot centers on a grizzled hero, Scorpion and a rag-tag band of resisters, who attempt to thwart the evil plans of the Templar squad. Scorpion has a young son, a Jr. badass who picks off people by sling-shoting explosives into their faces. They do grow up quick in the post-apocalypse. Daddy Scorpion rides around in his tricked out muscle car with machine guns spraying down the enemy at high-speed. The custom weapons alone put creativity points on the board.

This brings me to the standout performance of the movie. Fred Williamson, a favorite cast in low-budget action films, plays another lone soldier – Nadir, who doesn’t want so much to do good as much as he wants to get right in the middle of a fire-fight. I don’t imagine there’s much else to do in an urban wasteland. His weapon of choice is a bow for slinging exploding arrows. A lot of explosives went into making this. For being such a badass, he gets his own funky walkout music, every time he makes his way on-screen.

To provide motivation for a lot of the drama, there’s a built-in clichéd love interest. Scorpion is like a post-modern Tarzan, saving a helpless woman from certain death and proceeds to fight off one threat after another until they can live happily ever after. Sexist, I know. Archetypes tend to work well in action films. This movie knows what it is and doesn't let down when it comes to high-speed chases and pitched battle scenes.

Coming to a close, THB is definitely over-the-top and cheesy but charmingly appealing for the camp of it all. There’s plenty of senseless violence and bizarre characters to keep you entertained. If you are a fan of violent, futuristic sci-fi, Barbarians won’t disappoint. But be forewarned, don’t expect The Terminator – just a cheap-thrills, low-budget shlock-fest. Did I mention the flame-throwers? Oh hell, just take a look at the trailer below and all my words will prove to have been unnecessary.