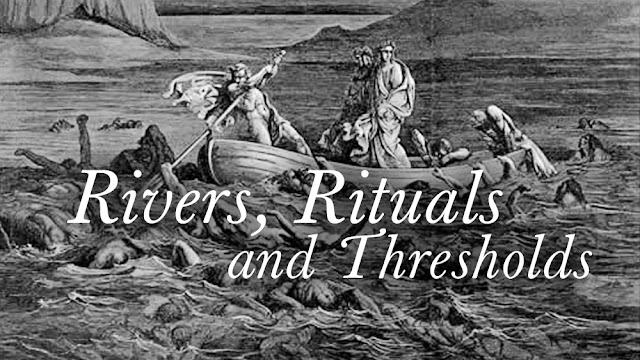 All summer I’ve been doing something new with my work lunch hour. It all started when I lost my private office to a shake up of the company floor plan. This was not a good thing in my case, as I had become very accustomed to my privacy, taking full advantage of being able to close a door. With the occult work I carry on with at various times throughout the day, a closed door makes all the difference in being… well occulted. In my secrecy, I was easily able to perform a simple ritual like Liber Resh Vel Helios, from the Thelemite tradition. It’s a four times daily observance of the stations of the sun as it makes its way from East to West. This is a tricky thing to pull off in public unless resorting to an astral visualization. With a personal office, it was a cinch. Once reseated in a classical open-space, call station environment, I had to think fast on how I could continue on with my solar adorations in a suitable fashion. In retrospect, it spurned me on to do what I should have done much sooner. Go outside.
Obviously, there’s really no better way to channel the Sun’s energy than by allowing myself a unobstructed view. As it happens my company office is located a few blocks away from a great little nature trail. And so began a new ritual. At the noon hour, while my coworkers scurry off in packs to hip restaurants, I slink out alone into the woods. It’s all very sad, anti-social, loner guyish ­- except it’s not. Not entirely, anyway.

I made a commitment in my magickal path to carry out this ritual and it really is best done on one’s own. The reality is, the time spent in silence, communing with nature is very conducive to my inner wellbeing. A daily opportunity to quiet the noise of technology and human stimulation is a must for me. Unlike extroverts, who draw their energy from other people, I find too much interaction with others to be draining. I recognize it makes me weird and keeps me out of the social loops, but I’m honest enough with myself to recognize how far back my weirdness goes. Playing a social game with in-crowds does nothing to grow my spirit. Not that I’m advocating an isolationist stance, which can be equally damaging to the interior. I find that I am having the best experience when I carve out time away from the human pack to attune to my own inner playground.

With the summer months waning, I began thinking about my journeys into the mist and what they might mean. Doing the same thing repetitiously everyday can often times make a physical space dull and trivial. In this case, the act of ritual magick has a way of making me much more hyper-sensitive to the environment around me. Specifically, in the spaces which I’ve deliberately chosen and are not merely happenstance. My morning and noon rituals happen in the same place at least on a Monday through Friday basis. My altar space at home goes a long way in creating a devotional atmosphere of purpose and comfort. Working away from it is never quite as natural or centered. But what I began to discover about the newer afternoon spot is that the wilderness has an effect on consciousness all of its own. 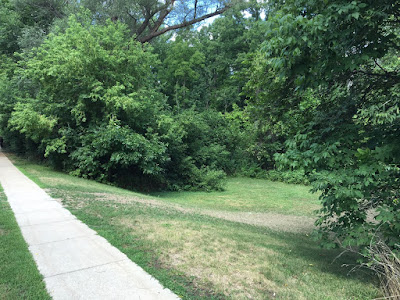 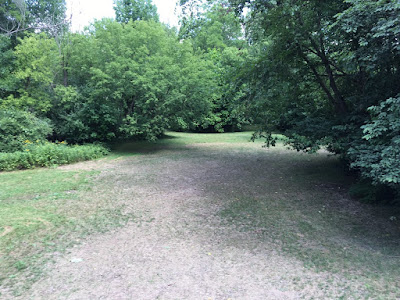 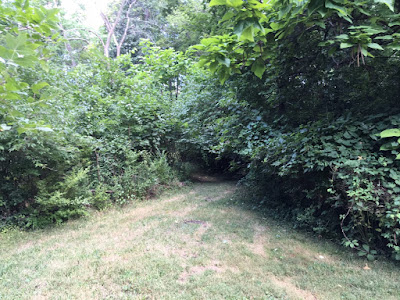 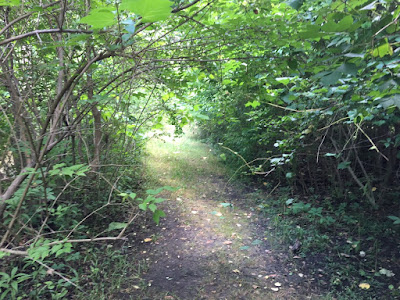 The walk that I take in and of it self became a part of the ritual. The more I thought about it, the more significant it became. Exiting the building I work at takes me down a hill towards a housing area. Along the side of the street is a clearing that descends a few feet further down. It’s right at the moment I step off the pavement that I’m aware of putting all the trappings of society behind me. It’s a subtle thing but a clear shift at the same time. As the earth levels out I’m brought to a narrow, tree-lined pathway. The river that defines the area flows along the side. It’s along this path, fully cloaked from public view, that I stop to perform the Resh ritual. It’s a simple set of prayers and visualizations but it quickly brings me back into the headspace I start my days with. Once completing the adoration, I come out of the path into another small clearing that brings me right up to a crossing of a sinuous river.

If the transition from pavement to earth marks a first shift in consciousness, the crossing of the river is felt even more prominently. In Joseph Campbell’s Hero’s Journey, the fourth aspect of The Departure is described as Crossing the Threshold. In this case, a makeshift bridge of fallen tree trunks and branches allow passage across the watery divide. At some point it occurred to me that crossing a body of water has ancient symbolic meanings. This was quickly verified when I referenced Egyptian, Greek and even Biblical sources. 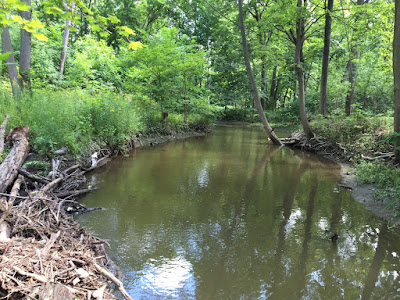 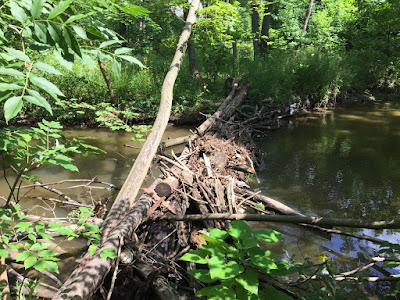 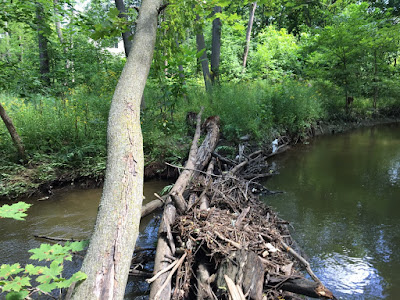 Rivers played a key role in the life of the ancients, going all the way back to Mesopotamia.

“Rivers appear in the Mesopotamian text as sources of life, boundaries, paths to the underworld and also forces of destruction. The rivers and seas of the ancient near east were, presumably, the best route for travelling to remote places. The farthest journeys of the ancient world were made by boat. The cosmologies of these river faring civilizations reflect their dependence on the rivers. The textual descriptions of how the dead travel to the afterlife, an otherwise distant and inaccessible place, also reflect the reality of river dwelling peoples.Egyptian and Mesopotamian texts describe the journey after death as crossing a river.Whether traversing the river of the heavens, the Hubur, the ‘Infernal River’ ortravelling the Nile to Abydos, death in the ancient near east was asupernatural journey to another shore.”

Symbolizing rivers as a dividing line bridging life on earth into the underworld would continue into the religious cultures of Egypt. As written about in the Egyptian funerary texts, the “River of Death” acted as a portal into Duat (the midway point between earth and the afterlife) where the souls of the dead would face many challenges on their way to the afterlife.

I found this metaphor of the river as a passageway to the underworld fascinating in relation to my daily walks. One of the most iconic rivers of ancient mythology is the river Styx. It was along this river that the dead had to pay the ferryman, Charon. A coin was placed into the mouth of the corpse to ensure safe transport into Hades. As a haunting side note, if you were poor and couldn’t afford the ferry, you’d be condemned to wander the river banks as Wraiths for eternity. Best pay Charon his fee.

Physical death and spiritual rebirth, through waters of purification. Is that what I’ve been experiencing? Probably not based on my little walks alone. But the intent of the totality of my workings is certainly pointing me in that direction. Otherwise, what’s the point? 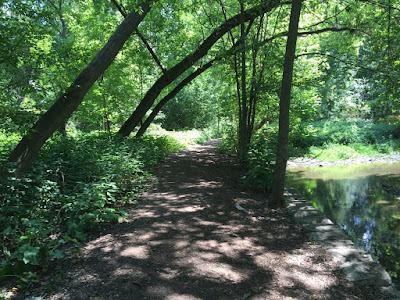 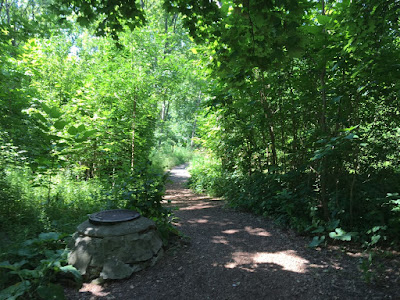 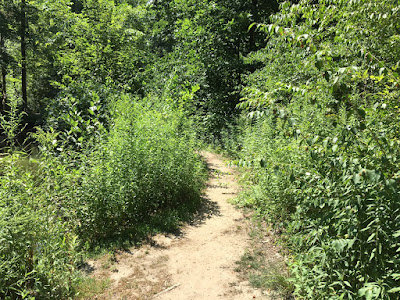 The four rivers depicted in the Biblical account of the Garden of Eden have become a topic of research for those who consider Eden to have been a physical rather than metaphorical place.

“And a river went out of Eden to water the garden; and from thence it was parted, and became into four heads. The name of the first is Pison: that is it which compasseth the whole land of Havilah, where there is gold; And the gold of that land is good: there is bdellium and the onyx stone. And the name of the second river is Gihon: the same is it that compasseth the whole land of Ethiopia. And the name of the third river is Hiddekel: that is it which goeth toward the east of Assyria. And the fourth river is Euphrates.” (Genesis 2:10-14 KJV)

Coming into contact with these powerful myths reassured me that my intuition about my own symbolic crossing of an otherwise mundane river, had some anchoring.  But there is still more to the journey after its crossing. The wooded pathway continues on along a trail, always straddled up to the river. As the walking continues I’ve had the sense that the woods could represent areas of my own consciousness. In that way the deeper I went in, the lower I plummeted into the depths of my subconscious. A more straightforward way to interpret the journey is simply the distance and separation placed between myself and the pressures of the workday.

I take the trail to the remotest bank of the river where I can make use of a large downed tree to sit on. It’s there were I take my refuge for the rest of the hour to eat my lunch and take in the sounds of the flowing water. Those mental spaces sat at river’s edge are contemplative and reflective of whatever issues or ideas that are current. Sometimes I bring a book. One day a family of deers were grazing through and one in particular came out to observe me sitting there. I remained motionless as we shared a long space of time staring out at each other. It was the only time I saw any deer in the woods all summer. Recently I utilized the time to plot out a list of all my major intentions and goals on paper. Most often I sit in the quiet and let thoughts come and go. I’m sure there are a hundred other practices I could incorporate there. 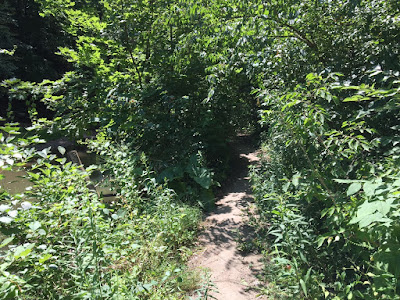 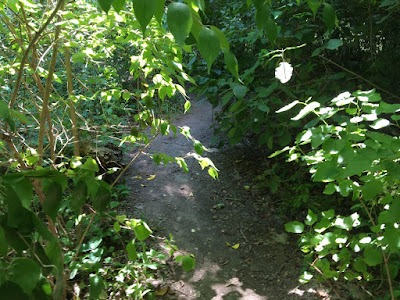 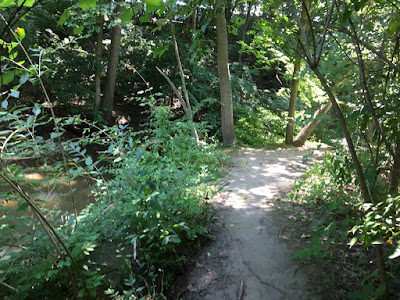 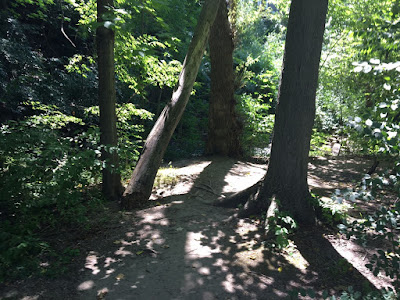 Of course there is always the walk back to work, or in Campbell’s Hero’s Journey terms, The Crossing of the Return Threshold. I don’t consider any single lunch hour escape to signify a complete and deeply felt Hero’s Journey. But what if I added all the hours of the summer spent out there? It’s hard to measure the cumulative effect all that reclaimed time has had on my psyche. I just know that it was revelatory in its practicality and simplicity.

By the continual repetition of this walk in and walk out of the woods, I realized that I had formed a brand new ritual on top of the basic script that had been handed down to me.

This simple daily jaunt completely changes the character of my day.  Although it’s not the complete transformational vehicle that my morning rituals contain, it most definitely reinforces the concepts and goals that metaphysical work aims to achieve.

I find it a great way to reclaim a sliver of personal time, freed from the atmospheric constraints of the soul-crushing culture of corporate America. The powers of earth, trees, wildlife and water help to stabilize my inner-world and Hermetically reseal my protections against false realities. 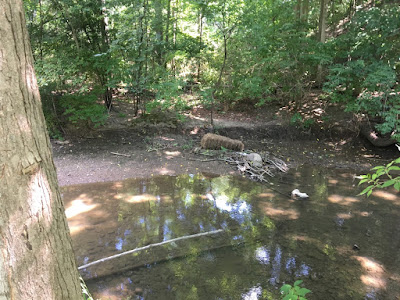 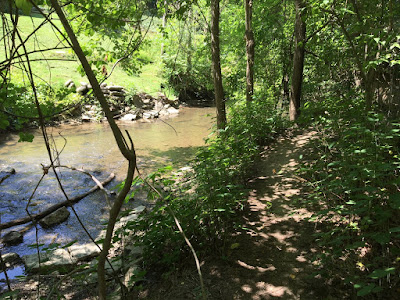 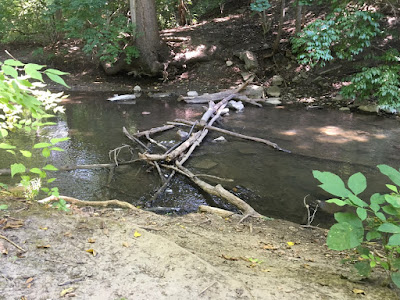 The really vital and cool thing about all this is that the nature trail is completely available to anyone who happens to live or work in the area. And despite that fact I’m usually the only one that takes advantage of its splendor. It’s a life choice. Just like the rituals I practice. Actions, behaviors, beliefs and choices that hold no meaning for the vast majority of people, have a profound meaning and significance for myself. In that way, I get to claim those spaces as my own. At this point, I have made my own personal relationship with the elements living there. There’s a price to be paid for choosing solitude and inner-growth over companionship and tagging along with in-crowds. But truthfully, I’m more worried about who I might be if I didn’t make that choice.