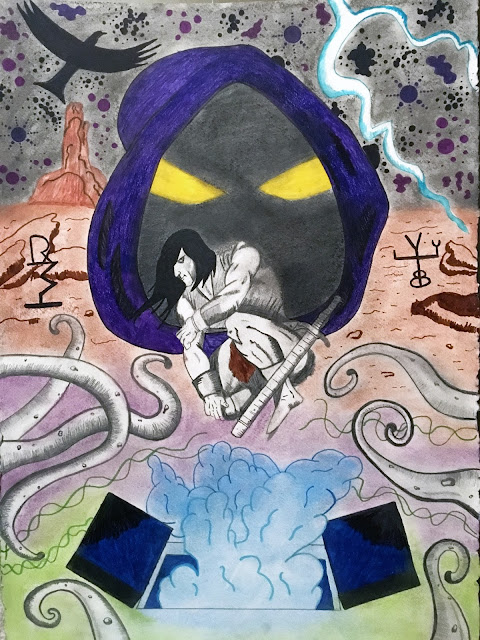 I've been on a big Conan the Barbarian kick as of late, mainly in the form of the large format Marvel comics from the 70's and 80's. Dealing with the day to day safety and mundane aspects of life and work, entertaining the idea of being a heroic swordsmen living in a fantastical era is quite appealing. To roam free across land and sea, living by strength and wits against dangerous men and monsters is a myth that seems to tap deep into the human psyche.

To have no modern attachments, traveling on horseback and getting caught up in extraordinary adventures is the quintessential fantasy and the stuff of my daydreams. I didn't grow up with Harry Potter, so my idea of fantasy has a much darker edge than the trends of late. I begin to wonder if I was a part of a final generation in which rugged individualism and gritty determination were aspirational qualities. Thinking better on it, perhaps popular archetypes are cyclical.

This is a little doodling towards a conjuring and future resurrection of the powerful swordsman archetype from the Hyborian Age.