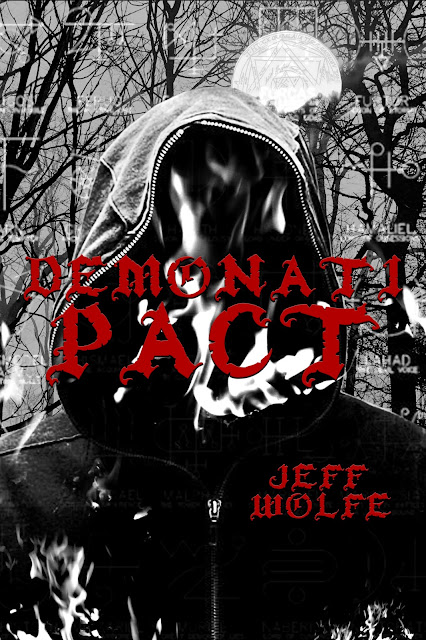 Demonati Pact is a screenplay I wrote that could have been a short story. The reasons it came out in script form I attribute to the overwhelming cinematographic and musical inspirations that birthed the idea. It all began as a series of images I had in mind of a high-contrast, black and white, low-budget horror film.

Being able to write in a way that allowed me to indicate camera angles and movements felt right for the project. It was quite fun dropping in specific musical tracks in that underscored the mood of specific scenes or the emotions I was feeling about them.

I'm a near life-long obsessive fan of the genre and always had dreams of being a director. At the time the idea manifested, I was fascinated with demonology, magic and parapsychology studies. I always felt that being under the influence of addictive drugs was a little like falling under a possession of sorts. An all-consuming force, that influenced otherwise sane people to commit insane or destructive acts.

This was my way of taking that idea to the extreme and inflicting that torture on a character and his victims. Under those conditions, there would be nothing for that character to do but to seek out a powerful occult means of banishing the evil attachment. The impression I hoped to create was not just a loss of innocence but a ripping up of innocence into a thousand blood-soaked pieces.

I originally posted it in five installments. Because I'd like to feature the writing on the right rail of this site it became necessary to collect them all under one post.