Like a lot of young people, I spent my formative years pursing ecstatic highs through the chemically aggressive means of drugs and alcohol. Burned out and very much unenlightened by age 23, I then began a non-substance based quest of transcendence knowledge. That journey has taken me down mostly traditional and popular paths like Eastern forms of meditation, martial arts and Yoga. The mainstreaming of New Age mysticism made taking on those disciplines seem very natural and easy to get information about. Almost everyone you know these days takes Yoga classes and quotes the Dali Lama on social media.

While the work I did in that time did wonders in my life mentally and creatively, I found myself once again, searching for a new “high.” It didn’t take long for me to discover a totally different approach to enlightenment once I set out the intention to do so. To my amazement, it was a path that had always been there just under the surface of art, music and culture I had been interested in my whole life. Through a series of interconnected podcasts and alternative media sites, the pieces of the occult puzzle began to crystalize before me. In no time, I had set down my lackluster practices and went full-tilt on a whole new spiritual trip that harnessed my enthusiasm and energies like nothing else before.

In general terms, I had sought out on the arduous task of becoming a practicing ritual occultist. My ideas of the occult were hazy and muddled by sensationalism and gossip before last year. It was a topic I associated with Wicca and Satanism. Little did I know the roots of the occult tree have much deeper and for me mush richer historical roots. Always fascinated by the paranormal, the idea of taping into cosmic powers of ceremonial magick set my world on fire.

To further develop my solitary practices and studies, I started digging in my local area for Mystery Schools of initiation. Being the rarified arts that they are, I haven't come up with a whole lot of options. The secretive nature of these practices can sometimes present barriers of entry for an outsider trying to find a way in. What I did find fairly easily on the Internet was an Oasis branch of the Ordo Templi Orientis. The O.T.O. is best known today as the esoteric order re-tooled by Aleister Crowley to transmit and reflect his religion of Thelema.

The BLUE EQUINOX OASIS was established in 1994 and at one time had author and Crowley biographer, Richard Kaczynski among their ranks. While they are not a full-fledged Lodge, they are officially sanctioned among other things to put on the public ritual of the Gnostic Mass. After a few email exchanges with a Frater getting addresses and dates, I decided the best thing to do would be to attend a ritual and see what the hell it was all about.

"Liber XV: The Gnostic Mass - Written in Moscow in 1913, the Gnostic Mass stands as one of the most beautiful and central rituals of the O.T.O. As the only truly public ritual of the Order, it gives an opportunity for all, initiate and non-initiate alike, to experience the mysteries of Thelema."

Having now participated in four Masses, I can offer up a few personal reactions. The event has drawn roughly 10-15 people the occasions I have been there. Some are active initiates, while a good handful are people checking it out for the first time. I felt welcomed and at ease right away as I sensed I was among fellow psychonaut weirdos like myself. To let them know I was somewhat in the know about things, I wore my Robert Anton Wilson shirt on my first trip out. To my pleasure, the shirt triggered at least one conversation with a  minerval member. On my second trip out it was my Re-Animator shirt that sparked a conversation that led to geeking out over Philip K. Dick, William S. Burroughs and Alan Moore. Rest assured, I was in the right place. The crowd gathers at the temple space 30 minutes before the Mass to catch up and newbies like me get to ask questions.

There have been varying degrees of explanation about what to expect and what to do during the ritual service. Different members take on instructional roles each time. I went in initially, totally blind about the intricacies of the Mass and its veiled meanings. Having practiced some magickal operations on my own for several months, I was open and ready for anything. Even after attending several times and doing some reading up in between, I'm still wrapping my head around the dense and layered performance. Admittedly, part of the allure is the mystery and intellectual challenge. It wouldn't really be esoteric if it was simplistic.

The one thing I did make sure to study prior to attending my first Mass was the central Thelemic text, The Book of the Law, written by Crowley in 1903. Study, being the right word for it, as it required lots of cross-referencing and dives into the dictionary to even attempt to decode the poetic verses. I made copious notes related to almost every line. There's just a ton to grasp when dealing with the occult due to the various mythologies coming into play. Between the three sections of the book, I found myself equally inspired and confounded. Book III presented the greatest challenge to relate with and embrace on the first go-round. But I've heard that even Crowley himself had issues with Book III. The text was dictated to Crowely over the course of three days in Cairo, Egypt by a discranate spirit, Aiwass. So, basically, it's Aiwass's fault! The purpose of the inspired holy book is to announce the Æon of Horus, in which the only Law is "Do What Thou Wilt."The new era and reign of the crowned and conquering child, Ra Hoor Khut. 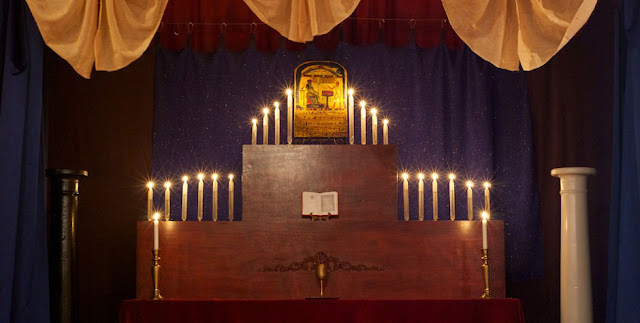 I found the Gnostic Mass to be a visual spectacle with powerful resonance, even without knowing anything about the symbolism being dramatized. Hymnals were provided to lay out some of the basic symbolic motions being made and choruses that are collectively recited. There are at least three or four active participants with roles to play during the ritual. The central parts belonging to the Priest and Priestess. All the performances I've watched have been very convincing, the Priest and Priestess completely absorbed in their roles. That commitment and confidence along with the ambience of incense, lighting and a low binary soundtrack made mental engagement effortless. The other cool aspect is that the audience participates as well, getting to share in the sacred energy.

All these elements amount to a highly theatrical drama, playing out themes of birth, death, rebirth, adoration and setting individual intention of the Will. And like a good old Catholic Mass, those in attendance get to partake in the "Body" and "Blood" of in this case, the Sun and the Earth.

I, 44: "For pure will, unassuaged of purpose, delivered from the lust of result, is every way perfect."

The Ritual was roughly an hour in length. Each time I pick up on a little bit more of the meaning of the dialogue. This would not have been possible without finding a solid explanatory outline, which you can read here - The Gnostic Mass With Annotations and Commentary by Helena and Tau Apiryon. The primary focus of the ritual is to allow yourself to reflect on your "True Will" and send your focused intentions out into the universe.

While the Mass itself was very interesting and mood enhancing, equally fascinating was getting the opportunity to interact with the members of the group as well as other newcomers. By no means a "people person," there's something great about meeting strangers you know have similar strange interests. Thelemites are intellectually curious and colorful people. Several initiates spent time with me detailing certain aspects of Thelema, the initiation process and what drew them into the group in the first place. More than anything, their easy-going approachability smoothed over the hump of delving into a foreign situation. There is no separation between Oasis members and the curious public. It's not at all like a weird cult vibe, where you feel keep at a distance and made to feel unworthy. The Priest, who has been a Thelemite for over 20 years, brought me into the makeshift dressing room to give me book recommendations and share some pointers on ceremonial practice. Out in the parking lot a few of us hung around looking at a guys iPhone UFO pictures. We talked about magick, secret societies and conspiracies freely in a way that I could never do around the water cooler at work. Fellowship was a word used by more than one person to describe their attraction to the fraternity.

While I'm still investigating the broader Western Esoteric Tradition in all its various tracts, having made connections with a community of fellow seekers is incredibly valuable. I've already become Facebook friends with several members and turned in paperwork to become and official guest at the Minerval level. If nothing more is accomplished, these experiences bring a smirk to my face when a co-worker absently asks the prerequisite question, "so, how was your weekend?"

II, 9: "Remember all ye that existence is pure joy; that all the sorrows are but as shadows; they pass & are done; but there is that which remains."


(Quotes featured, taken from – The Book of the Law, Aleister Crowley)