As often as possible I like to take a summer family road trip to explore somewhere new. I had been thinking about West Virginia for awhile due to it's feasible proximity and the Monongahela National Forest. After recently reading Sinister Forces by Peter Levenda, a whole new idea for this road trip began to take shape.

Levenda, details some amazing archeological history related to ancient Adena and Hopewell burial grounds. Sinister Forces, Book I, is an incredible whirlwind of a book delving into dark speculative histories interlinking the Council of Nine, UFOlogy, the JFK assassination, MKULTRA, Charles Manson and all means of occultism. As it relates to my proposed trip idea, the second chapter, The Mountains of Madness: American Prehistory and the Occult provided the catalog of significant sites of interest. In that chapter, Levenda pinpoints the most prominent mound and earthwork sites scattered across several states.


"Mounds are found all over the United States, from New England to Missouri, with a few in Texas and some in Florida. There are, in fact, over 100,000 of them (and this does not count all the sacred circles and standing stones, which most American's are totally unaware exist in their own country). Some of them are burial mounds, as can be evidenced by the skeletal remains found therein. Others are sacred sites arranged in ways reminiscent of Stonehenge in England, mounds astronomically oriented towards the solstices or to the rising of some specific star. Others still are vast works of art, such as Serpent Mound in Adams County, Ohio, which has been analyzed by professionals and shown to be more than art: an artistic astronomical computer, oriented towards the solstices, the moon, the sin, and the constellations of Draco and Ursa Major, consistent with a Theology we can only imagine, and like those intricately engraved Persian astrolabes one sometimes finds in an antique sotre or a souk," - Sinister Forces.

Having picked a final destination site at the Blackwater Falls State Park in West Virginia, I did a little Google Mapping based on Levenda's leads.

The first reasonable stop along a fairly direct route from Detroit would be at the famous Serpent Mound. Serpent Mound, now of questioned Adena origins, is an effigy mound (a mound in the shape of an animal) representing a snake with a curled tail.


"Late Woodland Period graves at the site suggest the earthwork continued to serve a mortuary function, and that this was the principal nature of the site, directing spirits of the dead from burial mounds and subsurface graves northward, not a place to conduct large ceremonial gatherings as has been suggested by tourism/promotion interests."

Levenda points out that professional analysis of Serpent Mound indicates it to be an "artistic astronomical computer, oriented towards the solstices, the moon, the sun, and the constellations of Draco and Ursa Major." 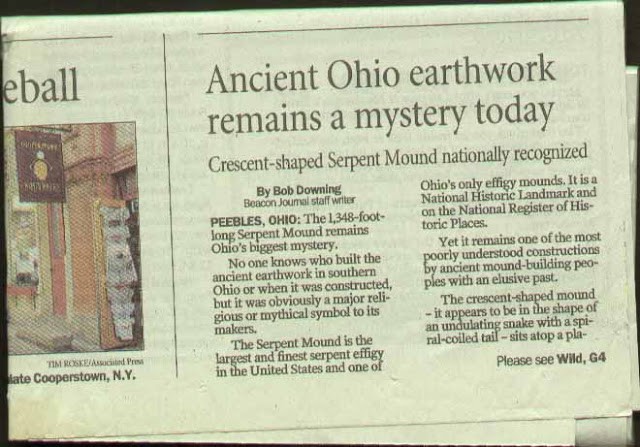 After spending a few hours at the mound exploring and taking photos, it's a quick hour drive east to reach the next stop at the Hopewell Culture National Historic Park, also known as Mound City. (This brings me close to the Charles Manson connection, as we was imprisoned early in his life at Chillicothe Correctional Institution, just outside of Mound City.) The Hopewell people and their burial sites date back to 200 BC to AD 500. Levenda describes Chillicothe as the heart of mound country, that once drew the attention of US Presidents Washington and Jefferson. 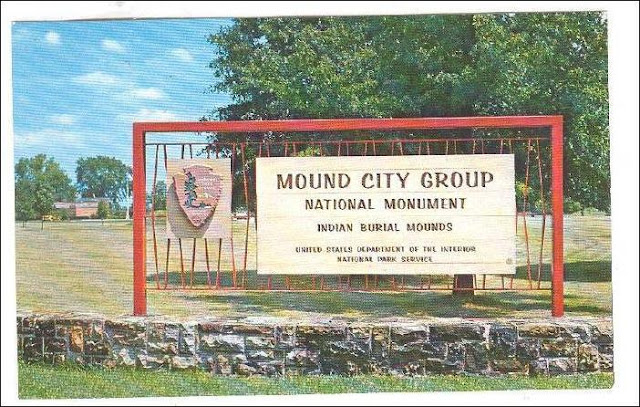 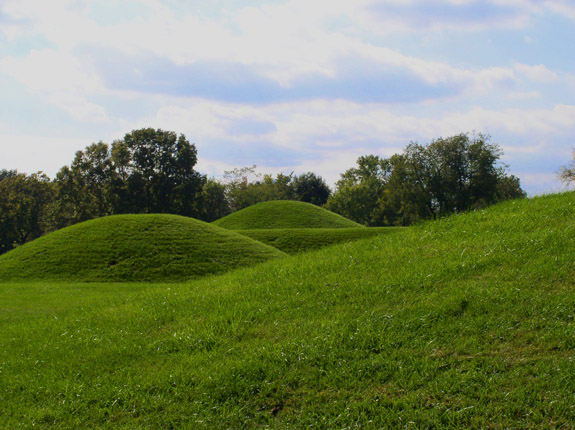 By the time we get done seeing as much as possible at this site, it will surely be the end of a long and busy day. We plan to find bedding in Chillicothe for the night, letting the events and sights of the day to seep into the subconscious. The following days journey would take us further east into West Virginia's Grave Creek Mound.


"The most impressive and largest Adena mound, Grave Creek Mound is the largest conical type of any of the mound builder structures. Construction of the mound took place in successive stages from about 250-150 B.C., as indicated by the multiple burials at different levels within the structures."

"The Grave Creek site boasts the largest mound of the Adena culture: it has a 295 foot base diameter, and is 69 feet high; it represents 60,000 tons of earth, and was built around 200 B.C." - Sinister Forces 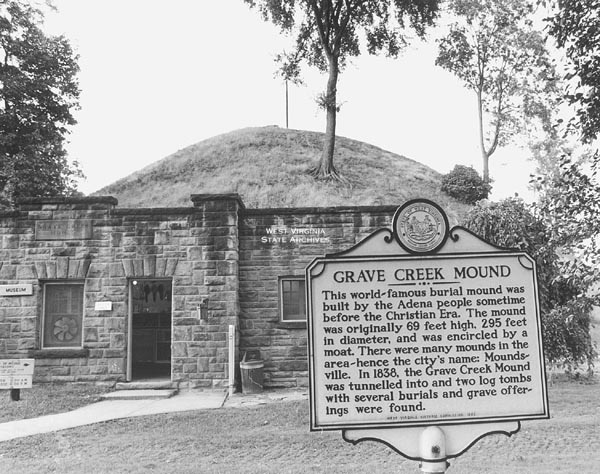 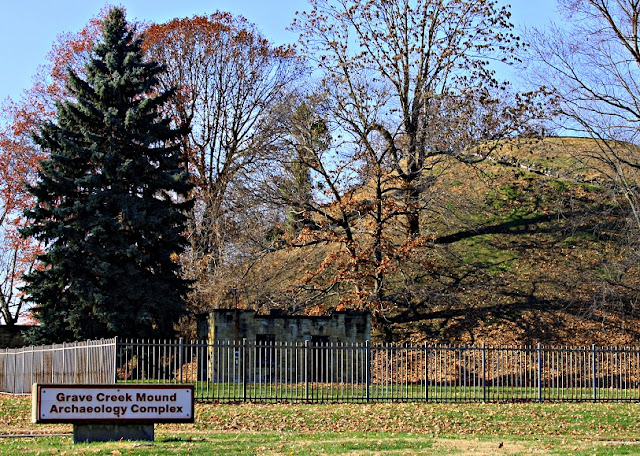 I'm definitely most excited about checking out this site. Levenda spins an interesting theory that calls into the question the true heritage of the mound builders themselves based on a piece of archeological evidence excavated there in 1838.

"In a burial chamber in that mound which contained a single skeleton and some copper bracelets (at a depth of 60 feet) an engraved tablet was discovered, carved with Phoenician characters in a style of writing that was common in Spain two thousand years ago. This writing sometimes called "Punic" was Semitic in origin, Spain then being controlled by Carthage, which in turn had originated in the previous millennium as an outpost of the Semitic Phoenicians... Thus, there is at least circumstantial evidence that West Virginia had been visited by Europeans at the time of Christ. There is no other way to explain the presence of that stone tablet in that grave, carved in a writing that would not be deciphered for another hundred years." - Sinister Forces

There's also the fun stories of the male skeletons discovered at Adena sites being up to seven feet tall, six feet tall for female skeletons. All these unexplained anomalies and mysteries add up to something profound but as of yet not fully understood. Where did the Adena culture come from? Were these burial sites astronomically aligned? What did they believe in? Who or what did they worship? What did their burial techniques represent? What kinds of forces of energy did they leave behind and how might they still affect the surrounding territories of today? Do burial mounds hold any more power than the average Anglo-style graveyard? Are there sinister forces working upon our collective unconscious, raising up from the grounds we live on? I refer back to Levenda for a deliciously Lovecraftian synchronicity to mull over.


"Although generally referred to as "Indian burial mounds," it was acknowledged that the Indians themselves had no precise data to offer as to their origins or purpose. When asked, the Native American elders of some tribes would refer to an older race or tribe that had lived in the area long before their own arrival. In some cases, there were stories of a race of the "Old Ones" or the "First People" who had lived and then disappeared ages ago." - Sinister Forces

Once having satisfied our appetites for adventure (or merely exhausted the patience of two small children), the plan is to head south, down into Morgantown. Aside from being a town with restaurants and motels to utilize, Morgantown also happens to be home of a working Lodge of the Hermetic Order of the Golden Dawn. I have yet to work out anything concrete in regards to this site but my hope would be to pay the Lodge a visit and possibly connect with a representative that could give us a tour of a real life magickal Lodge. I have investigated this branch online, whose title in full is the Hermetic Order of the Golden Dawn, Outer Rosicrucian Order of Appalachia. The Facebook page for the group is also informative, specifically the many interesting and artful photos they have posted over the years.

I consider this stop over to be a Lucky Strike extra if it can be pulled off. My fingers are crossed. A lot depends on the time and energy we have available when we reach that stage of the journey. I leave it to the gods of chance.

After an overnight in Morgantown, we would begin the final leg of the trek, headed to our destination at Black Water Falls State Park. I haven't attempted to discover anything sinister or esoteric about this isolated natural getaway. It just happens to be a beautiful location of green hills, water falls and vast amounts of trees and wildlife. There will be plenty of sightseeing and photography to do, and if we're lucky maybe something out of the ordinary will come our way. Some of the best pieces of creepy information one can run into on a trip are only revealed once you're actually standing there. I have one other day-trip in mind once settled down into the forest. The gorgeous Seneca Rocks are just 45 minutes south of our campsite and look to provide a breathtaking view of 440 million year old rock formations. That's cool all by itself.

I have to say, the really fun and challenging part about planning a trip like this is addressing the various logistics at play. I have 7 days to work with. A maximum drive time I'd like to subject myself and the family to. Then throw in a conservative budget to adhere to. All that being said, I think the number of sites and time spent at each is achievable, hopefully fun and not too stressful. Nobody wants to spent a whole vacation running from one place to the next without decompressing. For that reason, I've left off many other possible sites that could conceivably be tacked on.

We plan to venture out on this expedition this summer, possibly in late July or August. The goal would be to post follow up articles with my photography, accompanied by experiential observations along the way. Who knows what unplanned for synchronicities or pitfalls may befall us. Stay tuned.

If this article peaked you interest, you may also enjoy my previous article, documenting a trip to the Georgia Guidestones.