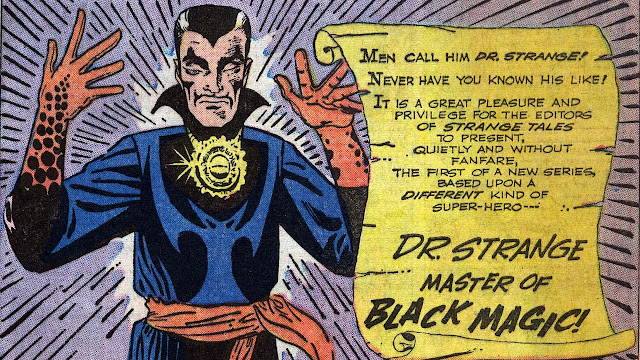 Dr. Stephen Strange: what the… This doesn’t make any sense.

The new Marvel film based on the mystic magician, Doctor Strange, is now out. Having just seen it, there are a few elements to call attention to that resonate with topics pertaining to Secret Transmissions. Born just prior to the mid-sixties counterculture movement, Doctor Strange comics channeled many of the reemerging spiritual interests in both in Western and Eastern forms of mysticism into its philosophical plot-lines  The "Master of Black Magic" or "Master of Mystic Arts" has always been a vessel for the psychedelic, non-materialist perspective while maintaining a highly intellectual veneer. That probably explains why the early series was so popular among psyched-out college students in the 60s and 70s.

The new film directed by a man of Christian faith, Scott Derrickson, does not at all shy away from having a spiritual point of view. In fact, the clearly mystical nature of the Doctor Strange character is what drew Derrickson to the project. Having previously directed supernatural films like Sinister and The Exorcism of Emily Rose, this film was another opportunity to present themes of otherworldly phenomena beyond the five senses. 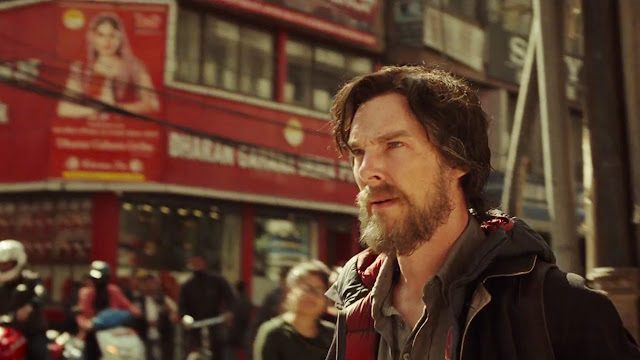 There's a clear monomyth operative in the biography of Stephen Strange. Prior to becoming a magician, Strange had reached the heights of reliance on the human mind, science and rationalism. He was a highly successful and rich doctor who achieved much prestige in his field. He was also an arrogant asshole, "looking at the world through a keyhole," as the Ancient One later describes. Having his physical gifts destroyed in a car wreck and his wealth depleted attempting to bring them back, Strange is forced to look beyond human aid.


“I reinvented a way for the spirit to heal the body.”- The Ancient One

This sets Strange off on a classic Hero's Journey, the first step of which is to set off to parts unknown. Is it any surprise he is directed to a hidden temple tucked in the Himalayan Mountains? As it goes, the teacher must first be found before the lessons can commence. Like so many other myth stories, the keys to the universe are held in secret by monks or priests, who obtained them through intense dedication and practice of physical and mental disciplines.

By any measure, Stephen Strange's transformation from narcissistic neurosurgeon into superhero magician is an initiation tale. Absolute life crushing events brought him to his knees, from where he could surrender his ego and accept a new path laid out before him. Having made the trek to distant lands, he was taken under the wing of an experienced sorcery student, Mordo, who brought him into the inner sanctum. Having been invited into the mystery school, he was met by the master, the Ancient One.


“You cannot beat a river into submission.  You surrender to it…Silence your ego.  Surrender.” - The Ancient One

This fits very very neatly alongside many of the great myths surrounding the aspirant martial artist or occultist. The discovery of a qualified master who can disseminate the proper techniques differentiates this myth from say the scientific birth of Spiderman or the technological one of Iron Man. The secret doctrines can only be revealed after the student has proven themselves worthy. In Strange's case by refusing to leave the doors of the temple until given admission. (The same concept was illustrated in the book and film, Fight Club.) 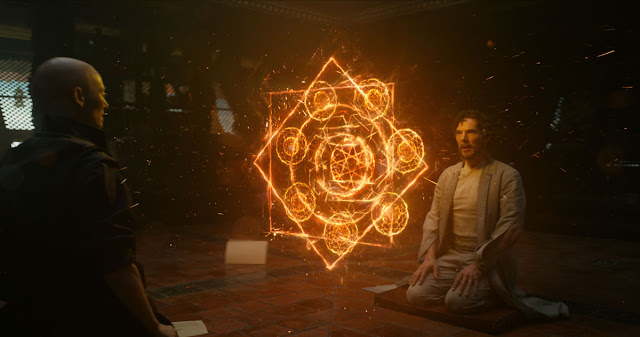 Unlike in the real world, Strange is gifted with a very vivid taste of hidden powers that broke down his disbelief and convinced him to proceed. The Ancient One sends Strange tumbling through the astral plane and through many inter-dimensions, largely as a response to his belligerent denial of the supernatural. Non-fictional initiates usually have to make a leap of faith without realizing the fruits of their labor until they are far down along the path.


"You think you know how the world works. You think this material universe is all there is. What if I told you the reality you know is one of many?" - The Ancient One

In order to transcend his pain and be healed, he had to set aside his beliefs which proved to be his biggest obstacle to enlightenment. In a very of the moment commentary, The Ancient One shows the skeptic doctor diagrams of chakras and acupuncture that he immediately dismisses as hogwash. Subtle energy fields within nature and within the human body have been recognized by spiritualists for thousands of years. They have been diagramed by systems like the Kabbalah and Hinduism and recognized by several others. But in this current age of scientism and Dawkins New Atheism, such occult notions have been laughed out of the conversation in terms of health and healing. 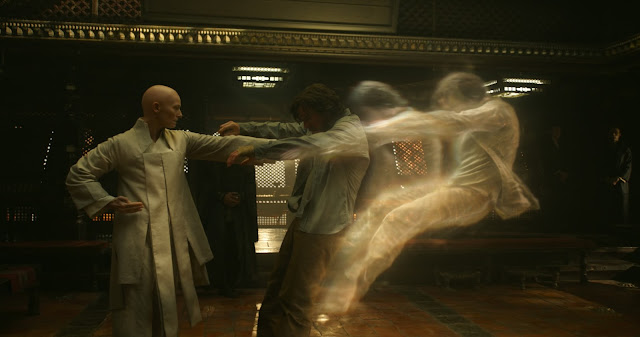 In this sense, this movie is actually pretty anti-establishment at least among readers of popular millennial-oriented news and culture websites. I won't pretend we don't also live in a time of widespread theism featuring very powerful fundamentalist strongholds. What's nice about this story is that the expansive box of spirituality presented onscreen will prove as provocative to the Bible thumper as to the skeptic.

There's already articles that have been published decrying Doctor Strange as a gateway into heretical, dark occultism. Dungeons and Dragons hysteria, anyone? Such esoteric and mystical practices like astral projection and opening gates into the multiverse will seem downright Satanic to the puritan. Man is not supposed to mess with unseen forces they warn. That's God's dominion alone, not mans. God-fearing Christians usually don't like to think that much of the idea that what Jesus did on this earth was very heavy magic indeed. (Shout out to Aeon Byte Gnostic Radio.)


"Through the mystic arts, we harness energy and shape reality." - The Ancient One

We see Strange develop as a student over an undisclosed period of time, studying thick, esoteric texts, training his body with martial arts and fumbling about to perform magic. He is advised that the only way to get good at magic would be no less strenuous a course than the one that brought him to his previous medical excellence. Studying and practice being The Way. To keep the story briskly on pace, Strange happened to be a very uniquely advanced individual, able to learn rapidly and advance to the top of the school. That's the Hollywood bit – in the movies, progress seemingly happens overnight. (Remember Karate Kid? He was kicking black belt ass after training for a summer.) 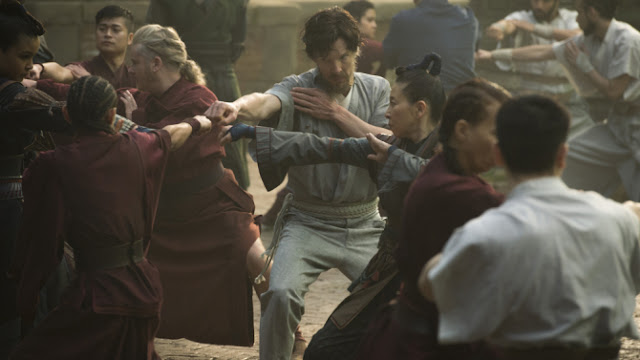 Having reached a certain level of prowess with magic and fighting arts, Strange is faced with his first dire challenge in the form of the dark occultist, Kaecilius and his cohorts. A former student of The Ancient One, Kaecilius represents the student who turns to "the dark side" out of frustration and a thirst for unbridled power. A Darth Vader archetype in a way. He begins to work under the influence of an immensely powerful entity called, Dormammu. Promised eternal life, Kaecilius and his gang attempted to destroy three Sanctums that serve as earth's protective shield against the destructive forces of the planet devouring Dormammu.


"The Avengers protect the world from physical dangers, we safe guard it against more mystical threats." - Wong

Facing a mortal threat and overcoming it is a key component of most monomyth tales, even if the threat is nature itself. It is through conflict and opposition that the initiate can come into new power and realize the extant of their abilities. I don't think it spoils anything to say that Doctor Strange does in fact successfully consummate his initiation and come out the other side a transformed man.

Nearly all comic book origin tales are really initiation myths. Further confirmation of this fact can be found in the book, Our Gods Wear Spandex: The Secret History of Comic Book Heroes, by Christopher Knowles. In that book, Knowles details the occult roots of nearly every significant superhero myth in comic history. In fact, he shows that the birth of the comic art itself was born out of the occult. It's a must-read and rather unique in research. 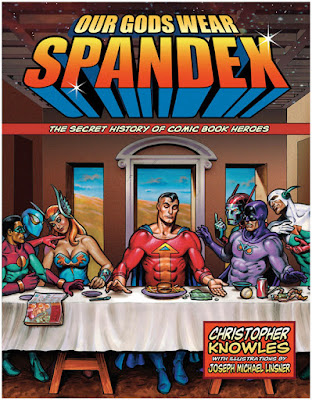 Of course, a comic book fantasy film like Doctor Strange probably isn't going to cause the general public to second guess whether or not there is more to life than meets the eye. For people who don't already believe in magic, the hyper 3D special effects used to visualize the results of magic only reinforce how unreal magic is in their conception of the "real" world. Did the Harry Potter or Lord of the Rings movies create new magicians? I certainly can't rule that out, unlikely as that may seem.

A recent article by Michael M. Hughes testifies that D&D did truly turn the author towards the occult. If ever there was a Marvel movie that could have that effect, it would be this one. It's the most directly and unapologetically esoteric and spiritual. The opening weekend proved a more than healthy appetite for a somewhat obscure and heady character from the Marvel universe. It could simply be a reflection of the public's desire to escape the barrage of the final bitter days of an ungodly painful election cycle.

One thing I can say for certain is it knocked the socks off my eight-year-old son, who came home mimicking the opening of portals with the circling of his hands. Fly-on, future magicians, fly-on.