Secret Transmissions on the Occulture Podcast 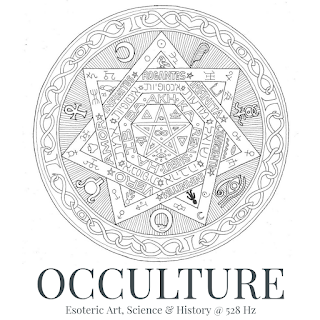 I recently had the great pleasure of being interviewed by the Occulture Podcast, hosted by Ryan Peverly. Ryan has had some real heavyweights from a variety of fields on his show and was honored to have the chance to talk with him about this blog.

We ended up touching on a number of personal topics that relate to the motivational underpinnings of Secret Transmissions. Being a bit on the nervous side, I tended to ramble on far too long and didn't always represent my ideas in the strongest ways. In predictable fashion, facts or needed relevant pieces of information escaped me in the moment. Hopefully with more experience that can be ironed out some.

If you push through our sprawling 90 minute talk, you'll hear us discuss my early subcultural influences, visits to esoteric American monuments, why I got into magic, my love of horror films and the dysfunctional state of society. I controversially assert my opinion that all too often mystery cults and occult orders have been vilified and misrepresented by the religiously inspired camps of conspiracy culture. Freemasons and magicians are constantly under assault by certain Christian dogmatists who assert that all forms of mysticism that lay outside of strict Biblical faith are fronts for satanic worship.

Obviously, this hostility goes way back. I did however try to emphasize that by no means do I wish to paint all Christians with a one-dimensional broad stroke. That would be as idiotic as the slanders that get thrown around against the esoteric. Tolerance and respect across the board for spiritual belief is a foundational code I strive to adhere to. The very structure of many forms of magic itself are inextricably tied to Judaism and Christianity as much as they are to Greeco-Roman and Egyptian paganism. I could have done better in making that point.

The message I feel the strongest about had to do with the use of esoteric spirituality as a tool for the deliberate reprogramming of the mind. With so much mind control and consensus reality driving much of what we believe and how we act upon those beliefs, the sovereignty that the occult path offers is in my experience, very liberating and self-empowering.

It's not for everybody however, and it has opened me up to aspects of myself that are not always blissful. In fact, it produces results that can be quite the contrary at times. I've very recently just gone through a patch of existential turmoil following some serious ritual work. So it is, in the process of inner-alchemy – regardless if it's walked out by means of the occult, secular talk therapy or traditional religious means.

Thanks again to Occulture for the time and do be sure to check out many of their other fascinating episodes.