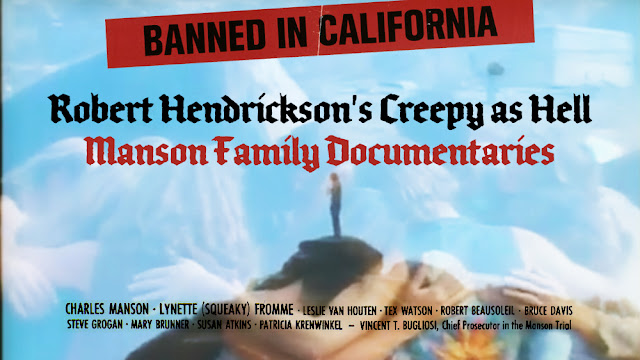 I get spooked every time I get drawn back into lurid tales and dark recollections of the Manson Family. And yet, I find the illusive meanings and lessons to be drawn out of that macabre history too compelling not to keep coming back to it.

The dangerous thing to think or say about the Manson Family is that on a certain level, you can relate to the appeal. The wilderness and isolation of the desert. The unbridled freedom of naked frolicking. Tripping out and playing music. Breaking ties with straight society. Getting back at authority figures.

These are all feelings that a lot of us can identify with and that we think about when we describe the counterculture of the hippie-era. A time many of us never lived through but wished we had. But could any of us have wished to be at 10050 Cielo Drive or 3301 Waverly Drive on those fateful and bloody nights in 1969? Nights that forever marred the entire hippie revolution of peace and love and turned it into a deranged symphony of blood and fear.

That’s where the ability to relate or romanticize goes out the window – and where the mindfuck begins.

Numerous aspects of the entire Manson ordeal beg for an understanding or some type of psychological closure. All the usual why and how questions. I often rake over the multifaceted circumstances in which pure evil can be bread out of naïve idealism. It’s a struggle not dissimilar to trying to wrap one’s head around how the Nazis came to power and carried out a holocaust with the complicity of so many otherwise average people. There never seems to be any satisfying conclusions or explanations. However, it does seem clear just how devastating the disturbed and charismatic ambitions of sociopathic personalities can be.

It’s not too difficult to draw out some conclusions about Charlie himself, as complex as even that task is. Or a violent simpleton like Tex Watson. It’s the Manson girls and some of the supporting male cast members like Paul Watkins and Brooks Poston that still represent disturbing moral conundrums for me. It’s like the once ordinary Germans who didn’t conceive of The Final Solution, but played a smaller role in carrying it out. I ask myself how deep could I get caught up in something like that under the right or wrong circumstances. It's best to assume you could never fall into such a trap, even at such a young and impressionable age.

The Manson story has been with me for a long time but I didn’t dig down into the details until the last few years. Last year in particular, I got engrossed in the history by reading Adam Gorightly’s book, Shadow Over Santa Susana: Black Magic, Mind Control and the Manson Family Mythos, along with listening to the brilliant 12-part audio drama, Charles Manson’s Hollywood, produced by You must Remember This.

I had about as much as I could take and had to put it down for awhile. Too much darkness. Too much dread. But the images and voices of the Family have a permanent and haunting affect. It wouldn’t be long before the questions and research kicked up again.

Which brings me to my stumbling upon a rare and once banned documentary film on YouTube simply titled, Manson. The 1973 film directed by the recently deceased, Robert Hendrickson, is an extremely dark and uncensored representation of Manson Family members following the death sentences handed down in 1971 to Charlie, Susan Atkins, Leslie Van Houten and Patricia Krenwinkel.

My initial discovery was quickly followed by finding another documentary from the same director, released decades later from archival footage. 2007’s Inside the Manson Gang rehashes some of the same territory but serves up an entire cache of unseen interviews and on-site footage primarily at Spahn and Barker Ranch with frequent segments drawn from Los Angeles' “Trial of the Century.”

Like Manson, the footage from Inside the Manson Gang was shot after the Tate-Labianca murder arrests and lead up to the post-trial convictions on January 25, 1971. The main difference with the later film is the detailed commentary provided by Hendrickson that attempts to tell the story from his perspective and give a blow-by-blow of his inner-thoughts from behind the camera as he seemingly places his life in the hands of known dangerous collaborators in murder. 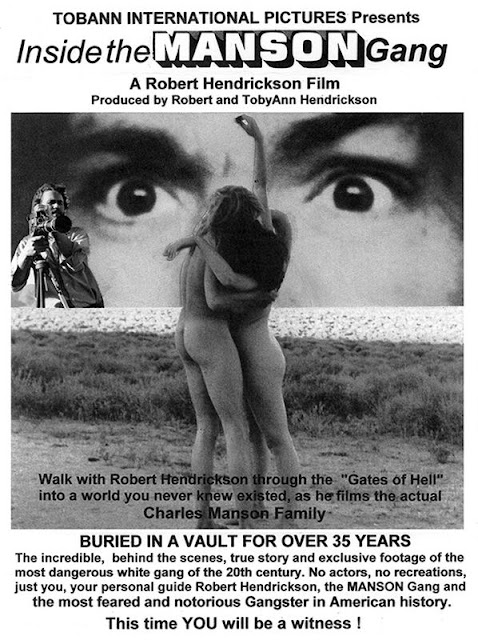 Hands down, the scariest commentaries were provided by the trifecta of Lynette “Squeaky” Fromme, Sandra Good and Nancy Pitman. These women remained under Charlie’s trance long after his conviction and imprisonment. The devoted cultists had the most eerie and empty gazes as they described what they would do for Charlie and how death is just another illusion. 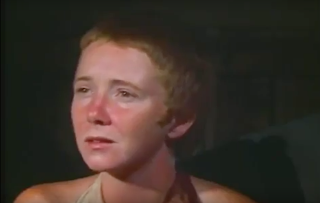 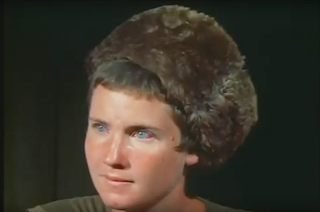 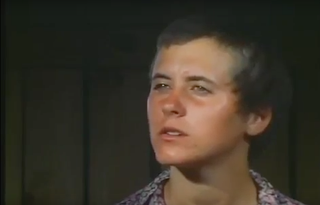 It gives pause to know just how unhinged spiritual jive-talk can make a suseptibale individual. As provided by their master, the Manson girls built a strong justification for all manors of heinous crimes. Hearing and seeing their determination and commitment pour out on camera really shook me up. Mostly because by looks alone, you would never be able to predict the extreme pathologies at work within them. All three of them would commit more crimes and see the inside of a cell not long after the release of the first film. All three, deranged for life, never to escape Manson's spell.

There’s another deep chill factor that accompanies the knowledge provided by Hendrickson that he is there with guys like Steve “Clem” Grogan and Bruce Davis following the brutal beheading of Donald “Shorty” Shea and knowing full well they had. Or when we witness critical moments like seeing Paul Watkins at Spahn Ranch after he was caught in a van arson attack, most likely by other Family members in retaliation for his turning informant.

At one point Hendrickson even comments, “I think I’m bearing witness to the end of civilization.” While hyperbolic, you can’t exactly blame the guy for feeling that way at the time with the amount of societal upheaval that was breaking out while his cameras were rolling.
The nerves it must have taken Hendrickson and his crew to accompany the cult on excursions to the remote Barker Ranch in Death Valley or to Devil’s Canyon, is impressive. Putting all those pieces of information together in your head when watching the blurry 16mm footage is what creates a grip that most modern horror or suspense films could only dream to achieve.

To be clear, these movies aren’t particularly good from an artistic perspective, in my opinion. They actual feel pretty amateur and sometimes sloppy in nature. The craftsmanship is not where the power lies. The intense draw these films contain have everything to do with the forbidden and authentic nature of the subjects and locations on display. The voyeuristic intrigue and atmosphere of doom are what these films have in spades.

I’ve never come across a more intimate view of the cult from the inside from the actual time period it was all going down. Manson himself granted Hendrickson permission to be the official Family documentarian from jail, and boy did that get him and his crew some up close and personal footage.

Essentially these are home movies. Albeit with subjective narration piled on in an attempt to place things into the context of Vietnam, race riots and hippie counterculture ideology. Hendrickson capitalizes on the fact that much of what film he doesn’t have to include is already baked into the minds of almost any viewer with a passing interest in the story. The gems originate from all the pieces of the puzzle that exist nowhere else. 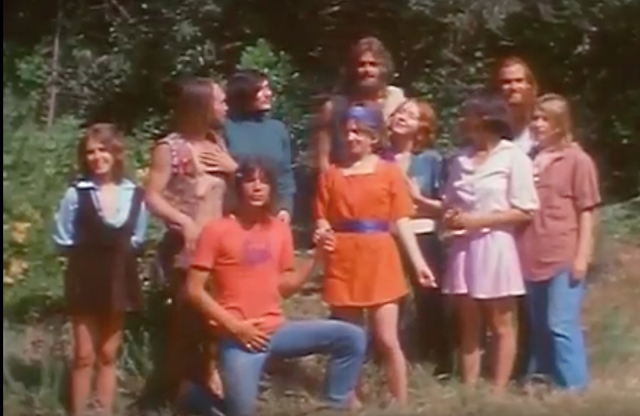 While many books do a wonderful job of immersing outsiders into the commune lifestyle of garbage picking, sexual escapades and psychedelic rituals – seeing some of the principles become real in such an unguarded fashion takes the drama to a whole different level.

It also has to be mentioned that the creepy factor of these films is heavily influenced by the soundtrack provided throughout by the songs of the Family, known as The Family Jams. Songs written by Manson and sung in unison by his followers are hair-raising and riveting. I couldn't help but appreciate their innocent harmonies. More impressive than the Family Jams are the the moody songs included by the duo of Brooks Poston and Paul Watkins. (Only to be topped by Bobby Beausolei's soundtrack for Kenneth Anger's Lucifer Rising in 1980.) I can't find a better word than "haunting" to describe it all. Words don't do the images justice anyhow.

Try watching these films without getting the creeps or the chills. Be forewarned, post-viewing nightmares are a distinct possibility.


“Come on home little children, come on home. When you see the children x’s on their head. If you dare look at them soon you will be dead.
Babies gonna disappear from the momma’s arms.
There’s gonna be a lot of fear
But we’ll be on the run.”
– Get on Home