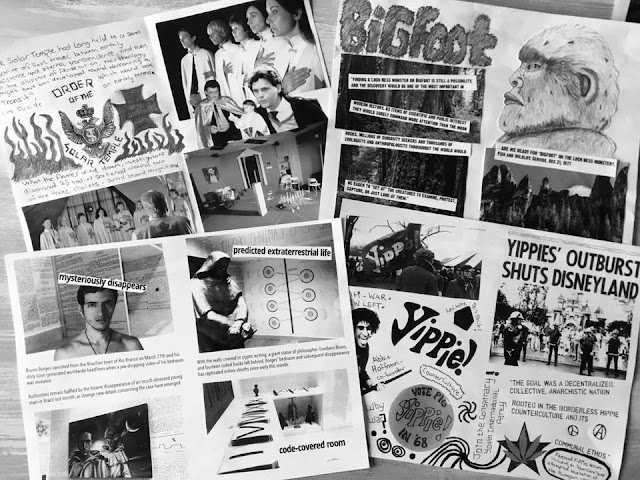 Instead of writing new articles lately, I have been putting together new collage spreads for a new zine edition of Secret Transmissions. It has been about six months since I last made one and feel it is overdue. The amount of time it takes in addition to posting articles and interview pieces prevents me from making more. It will feature a couple of recent essays that have appeared here on the blog supported by collage designs highlighting Bigfoot, the Yippies, The Order of the Solar Temple, the Bruno Borges disappearance and much more.

I love making zines and people's reactions to them. Perhaps a rethink of my efforts is in order. A recent Facebook post of my zine progress generated more comments than many of the articles I have put up. The fucked up nature of Facebook's audience reach restrictions inhibit my ability to get a very accurate understanding of what content I produce resonates deepest. However, I am getting the sense that the immediacy of the collage images I share has a potency or uniqueness that distinguishes them from essays or interviews that take more time to engage with.


I may be better served to obsess less with writing a certain amount of articles a month and get back to doing zines more frequently. Writing smaller essays to keep the blog fresh has also slowed my progress on writing short stories which was originally a crucial centerpiece for each zine issue. Work on a new fantasy short, currently titled – The Divinusolis Working has been coming along in fits and starts for longer than I would care to admit. I'm excited about the story but it has many more moving pieces to it than previous efforts and is taking time to properly work out.

Weird fiction and zine making were at the heart of starting this blog in the first place but both of those efforts have been lowered on my priorities in service of making regular blog posts but I think that needs to change. I think in the end I'd rather be producing more fiction, art and design pieces than trying to reach a monthly quota of blog entries. When I have something interesting to write about that constitutes an article I will definitely do so but not merely in service of hitting a number.

Taking on additional study in a magical order has me spread in new directions as well and it is all becoming a lot to keep up with. I'd like to say more about that but of course - I can't! I hope to have the new zine assembled before summer's end. Stay tuned.