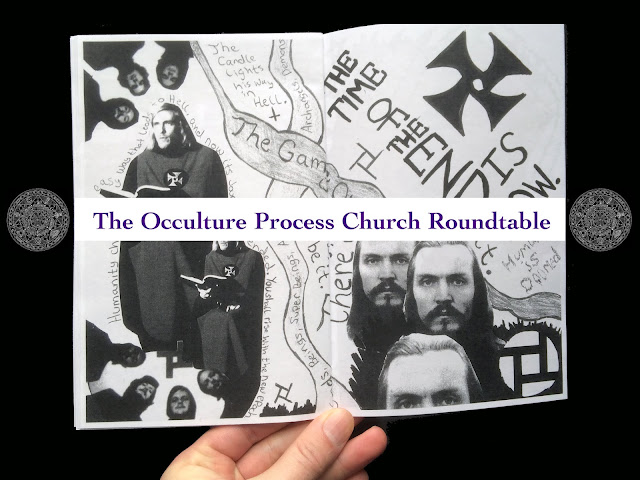 Lucky me, I've made a 4th appearance on the great Occulture Podcast, this time to discuss the infamous Process Church of the Final Judgement. I'm very grateful once again to host Ryan Peverly for the rare opportunity. This was a fascinating discussion for me because I could ask questions directly to a former member, the very level-headed and thoughtful Edward Mason. I've spoken with some former members online but never over the phone. Also in tow was previous Secret Transmissions guest, the documentary filmmaker, Neil Edwards. It was great to hear from Neil as always, but the information from Edward really makes this special.

When finally receiving and viewing Neil's amazing documentary, Sympathy for the Devil?, I was captivated by Edwards recollections and renditions of old Process hymns. He has rarely spoken publicly about his experiences and I doubt he will again. He's a really interesting guy and I'd love a chance to speak more with him in regards to his development spiritually towards gnostic and hermetic occultism in his post-Process life.

Rather than dwell on the sensational conspiracies, we really got to go deep on the real content of interest to me, which is in the actual theology as devised by Robert DeGrimston and the inter-workings of a hierarchical mystery school of sorts. There is so much that is misunderstood about the Process, that quite frankly will never be understood by Internet creeps who will never allow themselves to honestly read the documents that place the doom and apocalyptic gloom into context.

Edward does a really good job of speaking to the irony that was in play that screams out as such to me as someone familiar with the artistic language of Dada and other Modernist art movements of the early 20th Century. If you look at Process magazines and art, you'll really begin to see how they were playing with absurdism, provocation and self-deprecation. They played the role of scary monster and giggled at the fright they caused. But that is just one facet of a complex community, that like all communities, dealt with internal contradictions.

There were certainly many ethical failures and distasteful conduct that should prevent anyone from worshiping or idolizing this defunct cult. Their utopian mission failed, but it failed with spectacular bravado. The fact remains that their creative efforts were profoundly potent and continue to lure in generations of esoteric freaks. DeGrimston's critique of modern alienation and spiritual decay is perhaps more relevant now than ever. Like Gensis P-Orridge, I too feel that for whatever the man's failings, his writings have a fiery force to them that feels otherworldly inspired.

The style, graphics, and music they created holds together and has gone unmatched by other cults in my opinion. (The Heaven's Gate cult came close though.) Please give a listen and try to open your mind to the possibility that like so many other instances of witch hunts and Satanic panics, that the Process, though far from lily white, were perhaps victims of media hysteria and the bloodthirsty fantasy's of a public which thrives on titillation.

Definitely check out Neil's film as a starting point or companion to this podcast. It's really necessary as this conversation is really a bonus feature to that work. After that if you're still uncertain or insatiably curious, get a copy of Timothy Wyllie's excellent insider bio, LOVE SEX FEAR DEATH. But what you won't grasp or get from any of the aforementioned sources is the most critical piece of the puzzle, which are the actual writings and teachings of DeGrimston, which are scattered about but most accessible now on the new Virtual Chapter website. Without internalizing them, all judgements on surface level aspects and secondhand speculation is going to leave you with a incomplete and short-sighted perspective.